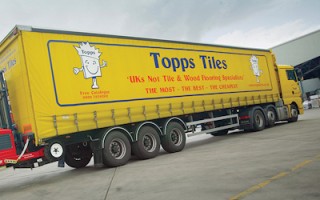 In an article in the Leicester Mercury, the Enderby group are reported as saying like-for-like revenue, which only includes stores open for at least a year, increased by 1.6 per cent.

This is an improvement on the same period of 2011, when revenue by the same measure declined by 4.2 per cent.

The article goes on to report that the group announced in November that decorators becoming more adventurous helped fuel a 58 per cent rise in profits to £12.5 million in the year to September 29.

The performance represented a turnaround for the company, which had seen a 22 per cent fall in pre-tax profits in the six months to April, 2012. Speaking in November, chief executive Matthew Williams said:

“There is a real drive towards people becoming more adventurous with their tiles, more fashion and design-aware.”

Topps Tiles, which has its headquarters in Grove Park, Enderby, has 322 stores and employs 1,600 people, including 200 in Leicestershire.

Related items (based on keyword)

This site uses Akismet to reduce spam. Learn how your comment data is processed.